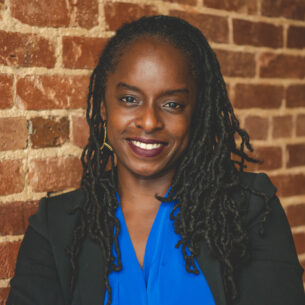 Atteeyah Hollie is SCHR’s Deputy Director. She formerly served as a Senior Attorney and more recently Managing Attorney in SCHR’s Impact Litigation Unit (ILU). Atteeyah originally joined SCHR as an Investigator in the ILU for four years before returning in 2010 as an Initiative for Public Interest Law at Yale Fellow.

Atteeyah has litigated cases challenging the denial of the right to counsel for poor Georgians, illegally closed courtrooms, wealth-based detention, inhumane prison conditions, and the denial of utility services because of court debt. In addition, Atteeyah, along with Managing Attorney Patrick Mulvaney, has spearheaded SCHR’s efforts to end extreme sentencing in Georgia.

Atteeyah is a 2010 graduate of Gideon’s Promise and currently assists the organization with training public defenders. She was named a 2017 “On the Rise” Georgia lawyer by the Fulton County Daily Report. She received her B.A. in History from Dartmouth College in 2002, graduated from the University of California, Berkeley School of Law in 2010, and is a member of the Georgia bar.