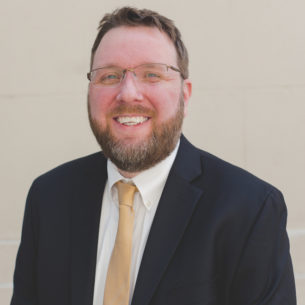 Ben Minor joined the Southern Center for Human Rights as the Foundation Relations Manager in 2018. Prior to joining SCHR, Ben worked at Children’s Restoration Network (CRN) from 2008 – 2018, where he first served as the Project One on One Director managing the organization’s tutoring & mentoring program before transitioning into the role of Development Director, where he helped lead the organization’s efforts in foundation relations, grant writing, and donor cultivation. Prior to working at CRN, Ben also assisted with fundraising efforts and program coordination at the Lewy Body Dementia Association, Partnership Against Domestic Violence, and MUST Ministries.

Ben graduated from Oglethorpe University in 2007 with B.A. Degrees in English and Philosophy, and he received Oglethorpe University President’s Citizenship Award that year. In 2007, he was also selected as a Carter Academic-Service Entrepreneur Grant Recipient by The Jimmy and Rosalynn Carter Partnership Foundation for his work with a grassroots organization to raise money for homeless programs by hosting concerts featuring local artists.