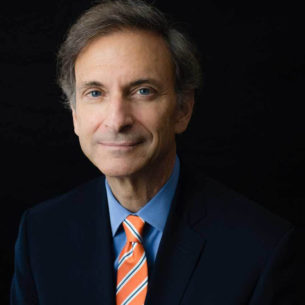 William (Bill) Abrams is a trial and appellate lawyer who Chambers USA calls a “wizard of the patent bar” and a “courageous litigator who understands both the broader picture and the social context surrounding issues.” Mr. Abrams’ representation of inmates in Alabama and Texas who were convicted of capital murder and have challenged their convictions and death sentences goes back twenty years and led to his work on the SCHR Board. Mr. Abrams is a shareholder at Schwabe, Williamson & Wyatt in Seattle and has been on the Stanford faculty since 1996, where he teaches courses on the death penalty, policy, civil rights, and technology and society. He was named a “California Lawyer of the Year” by California Magazine, a Top 100 Lawyer and Top 75 IP Lawyer by The Daily Journal, and has been named to Best Lawyers, Chambers rankings, and other recognitions.

Mr. Abrams has been lead counsel in over 100 patents, trade secrets and other IP cases since 2000, including trials, arbitrations, and appeals in federal and state courts involving patent infringement, trade secrets, interference and business torts, technology transfer and licensing, trademarks and advertising, and copyright. He has also been litigation counsel and advised companies and individuals in defamation, First Amendment and cases involving media, and in privacy matters. Mr. Abrams also has extensive experience in public interest and Constitutional litigation in trial and appellate courts.

Mr. Abrams devotes a significant part of his practice to pro bono matter and has handled a number of high-profile pro bono matters through the US and California Supreme Courts, particularly involving the death penalty, education, rights of children and youth, immigration, and foster care and children’s welfare. He was counsel for amici curiae in the Supreme Court and Ninth Circuit in Reno v. Flores, which led to the Flores Settlement Agreement that provided protections for unaccompanied migrant children seeking to enter the United States. Mr. Abrams was named a “Lawyer of the Year” by California Lawyer magazine for his representation of group foster homes against the state of California for the state’s failure to provide funding for the care of foster children as required by the Child Welfare Act. He received the State Bar of California Wiley Manual Award for pro bono legal representation and is a Daily Journal Pro Bono Achievement Honoree. Mr. Abrams is a member of the Board of Directors of the Southern Center for Human Rights, the Youth Law Center; former Co-Chair of the Silicon Valley Campaign for Legal Services; served on the Steering Committee of the American Bar Association Death Penalty Representation Project; is counsel for defendants in capital cases in Alabama, is counsel for a man convicted of murder in California who is asserting wrongful conviction claims; and is counsel for a Nicaraguan national seeking asylum in the United States. Mr. Abrams also served on the Advisory Board for the Center for the Legal Profession at Stanford Law School.