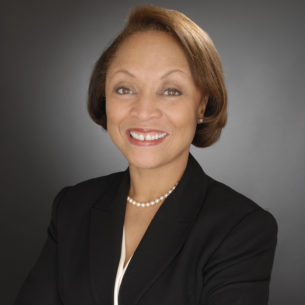 Dr. Janet Dewart Bell is a social justice activist and communications strategist with a multimedia background, as well as experience in policy advocacy, strategic planning, fund development, media training, and education. She is the author of the forthcoming book, Lighting the Fires of Freedom: African American Women in the Civil Rights Movement. She earned her doctorate in leadership and change from Antioch University.

She has been a key strategist and senior executive at a number of national organizations, including The Opportunity Agenda, PolicyLink, the National Urban League, and National Public Radio (NPR). She was Director of Communications and Public Relations for District Council 37, the American Federation of State, County, and Municipal Employees (AFSCME), in New York City. As a Visiting Research Professor at the University of Pittsburgh, she developed and taught a course on Effective Advocacy and co-taught a constitutional law course with her husband Professor Derrick Bell.

Bell established the Derrick Bell Lecture Series on Race in American Society at the New York University School of Law, now in its twenty-third year, and notes proudly that SCHR’s Stephen Bright was the 2014 lecturer. Along with other lead donors, she helped establish in 2012 the Derrick Bell Fund for Excellence at the University of Pittsburgh School of Law to honor Professor Bell’s memory. She has also endowed a scholarship at Baruch College, where she earned her Master’s.

Among her awards and honors are an Emmy® for outstanding individual achievement (CBS-TV affiliate in Washington, DC) and a Peabody for programming for National Public Radio.

She hosts an annual New York event for SCHR.