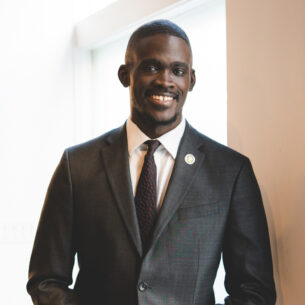 James Woodall currently serves as Public Policy Associate of the Southern Center for Human Rights, Founder/CEO of The Major Wish Group LLC, and former State President of Georgia NAACP. James is also an Associate Minister at Pleasant Grove Baptist Church in Marietta, Georgia. James also served as an Intelligence Analyst in the U.S. Army for 8 years. He ran for State Representative in 2016 and served on the State Committee of the Democratic Party of Georgia. He previously served as the deputy campaign manager for Francys Johnson’s (D) 2018 bid for Congress and as the legislative aide to State Representative Miriam Paris (D) for three years in the Georgia General Assembly.

He has been named to Georgia Southern’s “40 under 40,” and “Alumnus of the Year” in 2020 and was named a 2021 #Atlanta500 Leader by Atlanta Magazine.  James is a Fellow of the second class of the Civil Society Fellowship, a Partnership of ADL and The Aspen Institute, and a member of the Aspen Global Leadership Network.