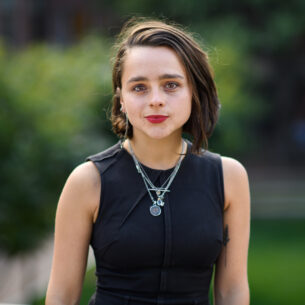 Jesse McGleughlin joined SCHR’s Impact Litigation Unit as a Toll Public Interest Fellow in 2020. Jesse earned her J.D. from the University of Pennsylvania Law School, where she was a Toll Public Interest Scholar. During law school, Jesse provided mitigation and reentry support for youth criminally prosecuted as adults in Philadelphia with the Youth Sentencing and Reentry Project and represented teenagers in their dependency cases as a member of the Child Advocacy Clinic. At Penn, she was an editor for the Journal of Law and Social Change, won the Williams Moot Court Competition and participated in the Appellate Advocacy Clinic, where she challenged money bail practices and fines and fees. Jesse interned at the NAACP Legal Defense Fund and the Defender Association of Philadelphia and spent her law school summers working for Still She Rises, The Southern Center for Human Rights, and the Bronx Defenders’ Family Defense Practice. Prior to law school, Jesse was a Fulbright teaching scholar in South Africa and worked at Community Connections for Youth, an organization dedicated to developing effective community-driven alternatives to incarceration for youth. Jesse received her B.A. in Africana Studies magna cum laude and with honors from Brown University. After her fellowship at SCHR, she will clerk for the Honorable Gerald McHugh of the Eastern District of Pennsylvania and the Honorable Theodore McKee of the Third Circuit Court of Appeals.