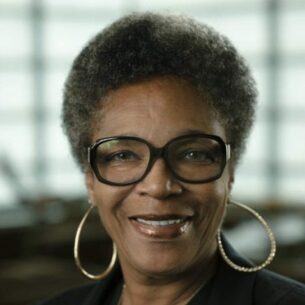 Marilynn B. Winn is the Co-Founder and Executive Director of Women on the Rise, a grassroots organization led by formerly incarcerated women to reduce the number of women under correctional control in the state of Georgia.

In 2011, as a volunteer member of 9to5 Atlanta Working Women (9to5) and Co-Chair of the Board of Directors, Marilynn was the Lead Organizer for 9to5’s initiative to “Ban the Box”; an effort to remove questions related to prior felony convictions from employment applications in the City of Atlanta. Atlanta made history by being the first city in the south to ban the box on their employment applications. Cities and counties throughout Georgia soon followed, including East Point, Fulton County, DeKalb County, Liberty County, Chatham County, Dougherty County, and eventually, in 2015, the entire State of Georgia. After working with national organizations to deliver over 130,000 signed petitions on October 26, 2015, to the White House, Marilynn’s efforts proved successful when President Obama issued an Executive Order to ban the box on federal applications on November 2, 2015.

In 2013, Marilynn received the Lilly Ledbetter Award from 9to5 for initiating the Ban the Box Campaign in Georgia. The award also recognized her for working to end employment discrimination for people with prior convictions in addition to her efforts to end mass incarceration. In 2014, Marilynn received a Letter of Recognition from former President Jimmy Carter and First Lady Roselynn Carter for her work to end employment discrimination for people with prior convictions and end mass criminalization in Georgia. She was also the recipient of the Inspire Award from First Step Staffing for her achievements in Community Activism. She later became a member of the Board of Directors of First Step Staffing, a non-profit organization.

On May 18, 2016, Marilynn was nominated to attend the United State of Women Summit hosted by the White House on June 14th. The notification notice noted “the ways in which you strive to make the world a more gender-equitable place”. Marilynn is a 2016 JLUSA Fellow.
In collaboration with the Solutions Not Punishment Coalition, Marilynn was instrumental in passing legislation in the City of Atlanta and Fulton County to implement a two-year pilot Atlanta Fulton County Pre-Arrest Diversion Initiative and passing legislation to reclassify marijuana legislation to a non-arrest offense for less than an ounce with a minimum fine of $75.00. In collaboration with key players, Marilynn won Bail Reform legislation in the City of Atlanta in 2018.

Currently, Marilynn is working on the “Community Over Cages” #Close the Jail ATL, a campaign that will close the Atlanta City Detention Center and repurpose the facility into an Equity Wellness and Freedom Center that would ensure our community services, not handcuffs. On May 28, 2019, Mayor Keisha Lance Bottoms signed legislation to close and repurpose the Atlanta City Detention Center.