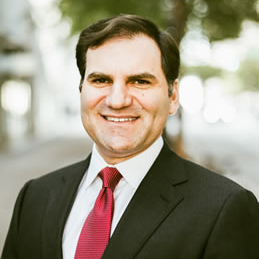 Mike Caplan, a founding partner of Caplan Cobb, specializes in complex business litigation, constitutional law, and appellate practice. Mike’s work has been the subject of numerous news articles in the Atlanta Journal-Constitution, the New York Times, the Republic, and the Fulton County Daily Report. Mike has also been selected as one of 40 “On the Rise” attorneys under 40 by the Fulton County Daily Report, among the “Legal Elite in Business Law” by Georgia Trend Magazine, and a “Rising Star in Business Litigation” by the Georgia Super Lawyers Magazine. In 2014, Martindale-Hubbell honored Mike with its highest rating of AV Preeminent for his legal ability and professional ethics.

Prior to founding Caplan Cobb, Mike practiced at Bondurant, Mixson & Elmore and served as a law clerk to the Honorable Richard W. Story in the U.S. District Court for the Northern District of Georgia. A New Orleans native, Mike received his undergraduate, J.D., and M.B.A. degrees from the University of Georgia, where he served on the Georgia Law Review and was inducted into the Order of the Coif and Order of the Barristers. Mike and his wife, Anna, live in Decatur with their three children.