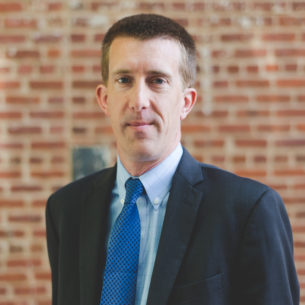 Patrick Mulvaney is the Director of the Capital Litigation Unit at SCHR. He focuses primarily on appellate and post-conviction cases in Georgia and Alabama.

Along with other SCHR attorneys, he represented the petitioners in Foster v. Chatman (2016) and McWilliams v. Dunn (2017), both of which were capital cases reversed by the U.S. Supreme Court.

Beyond his capital work, Patrick has been instrumental in establishing SCHR’s practice of challenging extreme prison sentences for drug offenses. Since 2015, SCHR has won resentencing and release for more than twenty clients in such cases.

Patrick has published numerous articles and essays on criminal justice and the death penalty, including in the Stanford Law Review and the Yale Law Journal Forum. He also frequently presents at conferences and trainings.

Prior to joining SCHR, Patrick earned his B.A. from Saint Joseph’s University in 2002, his M.A. from New York University in 2004, and his J.D. from the University of Pennsylvania Law School in 2008. Upon graduating from Penn Law, he received the Summer Jackson-Healy Award for Public Service. He joined SCHR as a Reprieve Fellow in 2008, became a staff attorney a year later, and assumed his current role as managing attorney for capital litigation in 2013. He was named an attorney “On the Rise” by the Daily Report, Atlanta’s legal newspaper, in 2016. He is a member of the Georgia and Alabama bars.