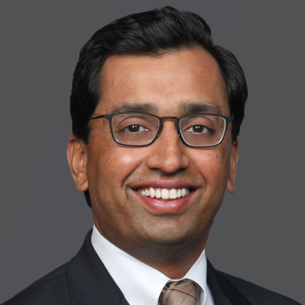 Rajesh (“Raj”) De is a partner in the Washington DC office of Mayer Brown, where he leads the firm’s global Cybersecurity & Data Privacy practice and co-leads its National Security practice. Raj focuses his practice on cutting-edge legal and policy issues at the nexus of technology, national security, law enforcement and privacy. Raj has held senior appointments in the White House, the Department of Justice and the Department of Defense. Raj returned to Mayer Brown in 2015 after serving most recently as General Counsel at the United States National Security Agency (NSA). As General Counsel of the NSA, Raj served as the agency’s chief legal officer and senior advisor to the NSA Director, supervising an office of approximately 100 lawyers and staff. Prior to his service at the NSA, Raj served in the White House as Staff Secretary and Deputy Assistant to the President of the United States, where he was responsible for managing all written material provided to the President. Prior to this role, Raj served at the Department of Justice as Principal Deputy Assistant Attorney General for the Office of Legal Policy, where he worked closely with the Attorney General and with senior DOJ leadership, litigating components and enforcement agencies on policy development and implementation across subject areas that included civil rights, criminal justice, national security, and civil litigation. Raj started his career at the Department of Justice, where he was a trial lawyer in the Antitrust Division under the Attorney General’s Honors Program.

Raj has also had significant congressional experience over the course of his career. He served as Counsel to the National Commission on Terrorist Attacks Upon the United States (known as the “9/11 Commission”), and as Counsel to the United States Senate Committee on Homeland Security and Governmental Affairs. Raj also served as General Counsel to the Commission on the Prevention of Weapons of Mass Destruction Proliferation and Terrorism, a bipartisan blue-ribbon panel charged with making recommendations to the President and Congress.

Raj has testified before Congress, and he has been quoted in numerous media outlets on a range of legal and security topics, including the Washington Post, Wall Street Journal, New York Times, and Financial Times.