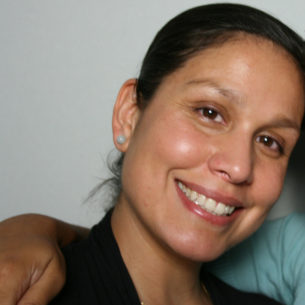 Vivianne Guevara is the Director of Client and Mitigation Services at the Federal Defenders of New York in the Eastern District. Prior to joining The Federal Defenders, Vivianne was an Investigator and Social Worker at the Southern Center for Human Rights in Atlanta, Georgia, where she supported litigation that challenged conditions in juvenile and adult jails and prisons in Georgia and Alabama, the provision of indigent defense in Georgia, and the proliferation of debtor’s prisons in Georgia. She also worked with clients individually to reduce the impact of the collateral consequences that resulted from civil and criminal court involvement. Vivianne began working in public defense as a Social Worker at the Bronx Defenders, where she worked with clients charged in domestic violence and mental health courts.

While working towards her Master’s Degree in Social Work, Vivianne was an Outreach Specialist at The Bowery Residents’ Committee where she worked one-on-one with persistently homeless individuals on the streets and in the subways of New York City. She interned at the Dr. Susan McKinney Nursing and Rehabilitation Center in Brooklyn and worked on case management and discharge planning with clients suffering through long-term dementia, terminal illnesses, traumatic brain injuries, and short-term rehabilitation.

Vivianne is a graduate of New York University, Columbia University’s School of Social Work; she is also a circle keeper and peacemaker with training and certification in Restorative Justice and Restorative Circles. Vivianne is proud to serve on the Board of the Southern Center for Human Rights.