Home  |  Events  |  The South Got Something to Say: Black Women Building Power in Georgia 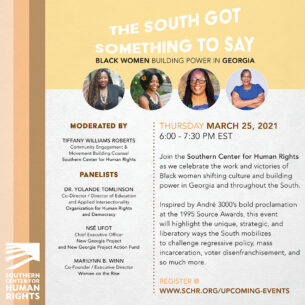 The South Got Something to Say: Black Women Building Power in Georgia

Join the Southern Center for Human Rights as we celebrate the work and victories of Black women shifting culture and building power in Georgia and throughout the South.

Inspired by André 3000’s bold proclamation at the 1995 Source Awards, this event will highlight the unique, strategic, and liberatory ways the South mobilizes to challenge regressive policy, mass incarceration, voter disenfranchisement, and so much more. 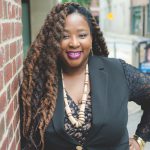 Tiffany Williams Roberts joined SCHR in April 2018 as the Community Engagement & Movement Building Counsel. Tiffany Roberts is a civil rights and criminal defense attorney in Atlanta. She has practiced criminal defense since 2008, first as a public defender with the Atlanta Judicial Circuit Public Defender and later as a solo practitioner beginning in 2011. As a public defender, Tiffany represented hundreds of indigent clients facing felony prosecution and graduated from the Gideon’s Promise trial advocacy training program. She expanded her private practice to include civil rights litigation for victims of police abuse. 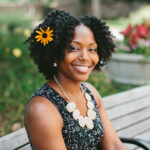 Dr. Yolande M. S. Tomlinson is a radical Black queer feminist, who brings a lifetime of experience, passion and learning to her role as the Director of Education and Applied Intersectionality for the Organization for Human Rights and Democracy (OHRD). She is a native Jamaican, an avid gardener, and a lover of people and all species of flowering plants, including dandelions.

In partnership with its executive board and leadership team, Yolande leads OHRD in visioning, developing, and executing educational programs that integrate lived experiences, intersectional knowledge, and sound learning and organizing principles to empower members, supporters, and partners in the realization of a better, more just world. In this role she helps to develop and implement ORHD’s national and international strategy. As a co-founder of OHRD, Yolande’s other responsibilities include collaborating with OHRD’s leadership team to manage and support the harmonious and smooth functioning of the organization. 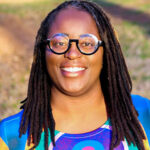 Nsé Ufot is the Chief Executive Officer of the New Georgia Project (NGP) and its affiliate, New Georgia Project Action Fund (NGP AF).  Nsé leads both organizations with a data-informed approach and a commitment to developing tools that leverage technology with the goal of making it easier for every voter to engage in every election.  Nsé and her team are also developing Georgia’s home-grown talent by training and organizing local activists across the state.  She has dedicated her life and career to working on civil, human and workers’ rights issues and leads two organizations whose complementary aim is to strengthen Georgia’s democracy.  Under Nsé’s leadership, NGP has registered over 500K eligible Georgians to vote and has no plans of slowing down. 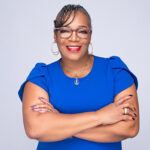 Marilynn B. Winn
Co-Founder / Executive Director
Women on the Rise

Marilynn Winn is the Co-Founder and Executive Director of Women on the Rise. She has been organizing for abolitionist reforms to the criminal legal system in Georgia for the past decade, soon after her own release from prison. Ms. Winn has gained national attention for her work to ban the box on employment applications in Georgia and her vision to close the Atlanta City Detention Center, replacing it with a Center for Wellness and Freedom.

She received the first Lilly Ledbetter Award from 9to5 Georgia in 2013, was recognized by President Jimmy Carter and First Lady Roselynn Carter for her work to end employment discrimination in 2014, received the Inspire Award from First Step Staffing, and received the Champion for Change Award in 2019. She was a JustLeadership USA 2016 Fellow and is a current fellow with the Center for Civic Innovation.