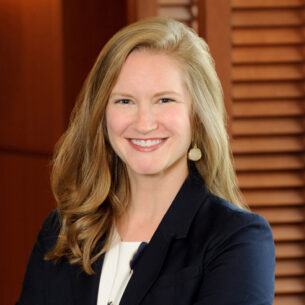 Meredith Kincaid’s practice covers a range of investigations and criminal and civil litigation matters in state and federal courts. She has also represented news organizations and nonprofits seeking to enforce access to government information and is a member of a litigation team that represents one of the three major consumer reporting agencies in its national defense of consumer litigation cases under the Fair Credit Reporting Act. She has degrees from the University of Texas School of Law (J.D. with honors 2013; Editor-in-Chief, Texas Journal on Civil Liberties & Civil Rights; Pro Bono Scholar), Indiana University (M.A. in Arts Administration 2007), and the University of North Carolina at Chapel Hill (Bachelor of Music with highest distinction 2005; Phi Beta Kappa).

Meredith maintains an active and diverse pro bono practice, including representation of individuals on death row, domestic violence victims seeking protective orders against their abusers, sponsors of unaccompanied minors seeking special immigrant juvenile status, and individuals asserting constitutional and civil rights claims in federal, state, and immigration courts. In addition to the Ambassadors Council, Meredith currently serves as co-chair for the Georgia Lawyer Chapter of the American Constitution Society, a member of the Media Law Resource Center’s Next Generation Committee, and a member of the Atlanta Women’s Chorus. Prior to attending law school, she worked as a professional fundraiser in higher education and the arts. In law school, she worked in the Capital Punishment Clinic, representing clients who were sentenced to death in Texas.

Back to Our People
PREVIOUS